Motoring can be a dirty business, but Toyota’s new Auris Hybrid is doing all it can to keep it clean

It’s almost a year since the mother of all traffic jams entered the record books – Beijing’s 60-mile, 12-day monster.

It’s almost a year since the mother of all traffic jams entered the record books – Beijing’s 60-mile, 12-day monster. It spawned its own micro economy with food sellers and laundry workers plying the lines of trapped drivers, while the rich abandoned their cars and paid others to sit in their static vehicles.

The jam put into context the paltry three-hour tailback I was stuck in over the bank holiday. We lay on the grass embankment and chatted to our new neighbours about the Ohio kidnappings, the Padstow boat tragedy – and about the sheer waste of resources a standstill jam causes.

Even when flowing sweetly, Britain’s roads are voracious. According to Roadclock.com, on any average day, more than 350,000 tonnes of carbon are emitted, 85,000 tyres will be replaced and 100m litres of fuel will be consumed – netting £1,000 per second in duty for the tax man. Start factoring in congestion, rush-hour snarl ups, weekend gridlock, marital friction (“Why on earth did you come this way?”) and you start to feel the nauseating strain a jam puts on us.

Which is why, in some small way, I was glad the car I was stuck in was Toyota’s Auris Hybrid – an eco car that does almost 75 miles to a gallon with just a nostril caressing whiff of emissions – 85g/km. The ethically pure Auris is as clean as Jay Rayner’s dinner plate…

The notion of a green car will, of course, always be oxymoronic. Like false truths, turkey ham or Arsenal trophies, some pairings seem poles apart. But manufacturers are working hard at pulling the opposing ends together. And with its Auris hybrid, Toyota is doing better than most. Thanks to aerodynamic improvements, weight saving, engine readjustments and technological cunning, this Toyota has beaten off the likes of Volkswagen’s Golf Bluemotion and BMW’s i3 electric supermini to claim the title of Green Car of the Year 2013.

Hybrids, electrics and alternatively fuelled cars have all been hailed as the solution to our motoring ails, but they tend to be over expensive, over complicated and, frankly, over-rated. They’re ordinary cars that have been forced into a new template in a vain attempt to capture the green pound. They feel heavy, fragile and unreliable. But they’re getting there, and this new Auris is another step forward.

Over the years, Toyota has built some stultifying cars. But with the likes of the GT86 and now this, the Japanese giant seems determined to regain its place in the world. The new Auris will continue to be made in the UK, at the Burnaston factory in Derbyshire, where the outgoing model is already a top seller for Toyota – one rolls off the production line every 66 seconds. 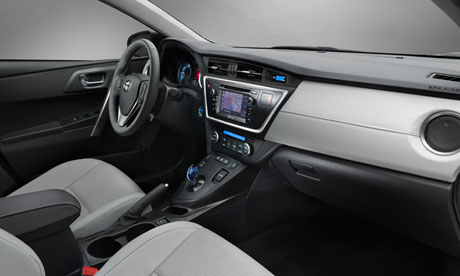 
Compact yet roomy, classy yet affordable, drivable yet green… the Auris is perfect for anyone wanting to occupy slightly less space on our crowded roads.

Email Martin at martin.love@observer.co.uk or visit guardian.co.uk/profile/martinlove for all his reviews in one place