Cody Wilson is a polite, 25-year-old law student at the University of Texas in Austin, with dark, close-cropped hair and a forward, affable charm.

Cody Wilson is a polite, 25-year-old law student at the University of Texas in Austin, with dark, close-cropped hair and a forward, affable charm. This week he plans to release the blueprint for a gun that can be downloaded from the internet and produced using a 3D printer.

He and his friends have spent almost a year developing the Liberator, a “Wiki weapon” that can be assembled from components made on an $8,000 (£5,150) printer that they bought on eBay. Using files shared online, the machine creates the solid parts from layers of plastic.

Wilson’s group, Defense Distributed, thinks everyone should have access to a gun and is working to make it possible through Defcad.org, a depository for weapons designs. It was set up in December after its files were removed from another site following the Sandy Hook elementary school shootings. In March, Wilson was issued a federal firearms licence, allowing him to make guns legally.

“I come from a typical middle class family, for the United States in the south: religious parents, conservative values, though we didn’t own a lot of firearms,” he says. “We had one shotgun that we never really used.” 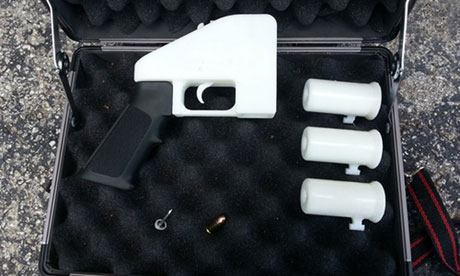 
Despite buying a shotgun shortly after turning 21, Wilson says it was his studies, first as an English literature major, then as a law student, that started his interest in the politics of weapons ownership. “I read [19th-century French anarchist theorist Pierre-Joseph] Proudhon,” he says, “I like Jean Baudrillard. I like their critiques of mass culture.”

He admits that, given current technology, printing a gun is the least effective way of obtaining a firearm, and that it is easier to simply fashion a gun from the contents of any hardware store.

Yet he half hopes, half believes that soon, thanks to the convergence of file-sharing and 3D printing, there will come about “a complete explosion of all available gun laws. I think we should be allowed to own automatic weapons; we should have the right to own all the terrible implements of war, as [American political philosopher] Tench Coxe said, and I think this principle probably applies globally.”

A self-described child of the internet age, Wilson is an admirer of Julian Assange and Kim Dotcom. “I number myself among them, at least in spirit,” he says. “I think the future is openness to the point of the eradication of government. The state shouldn’t have a monopoly on violence; governments should live in fear of their citizenry.”

His ambitions don’t stop at firearms. Ultimately, he wants to turn Defcad into “the world’s first unblockable open-source search engine for all 3D printable parts”, a Pirate Bay-style archive not only for printable pistols, but for everything from prosthetic limbs to drugs and birth-control devices.